A trip to Southport was undertaken in the rental car,way up market compared to Blackpool,apparently the tide goes out about 2-3 miles,saw it on the way in.
﻿ 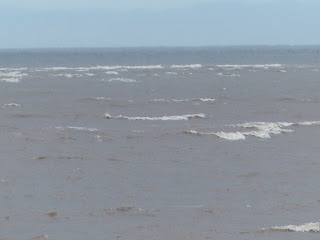 The rough water is the new tide rush,n in

The promenade has a good range of top end shops,and found a lolly shop with all the old classics,bought some aniseed balls and old English wine gums. 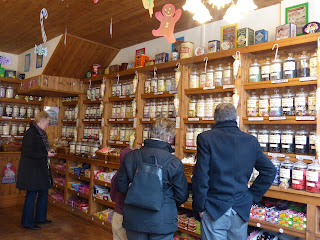 A small selection of lollies on offer 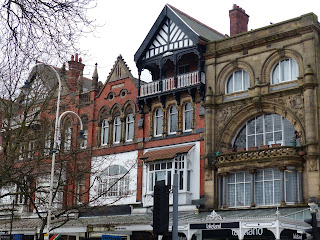 Contrasting styles on the promenade

Having booked to be at bridge 9 by 9am Friday we set off Monday afternoon.A bit gusty but nothing a novice couldn't handle.Made it to Parbold,parked for the night. 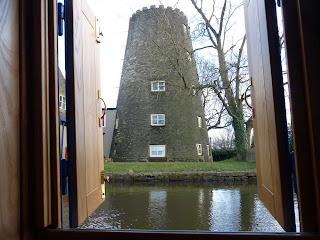 Side hatch view,houses an art gallery.

Tuesdays travel as far as Burscough involved meeting with a real Freak,approaching a swing bridge a plastic,rough as,was parked up,the wind had increased intensity and parking up to allow Leonie off had become more difficult.Anyway,next thing this Freak appears from the plastic,runs toward us screaming give us your rope,give us your key,i lost mine a couple of bridges back,ill do the bridges you just follow.He,s like screaming hysterical,barely understandable,narrow boats are a pain in the arse,he had one once,plastics are this and that and his girl friend was in side ironing.It was bout a 14 footer,would,nt had a candle let alone a power supply.We hung onto the key,he snuck through behind us.He got ahead then all of a sudden his plastic is powerless in mid stream.On the horn and hard reverse I managed to stop bout 2 feet short of smashing in his rear end.Just stopped he yells out.Next swing bridge he gets off to help,girl friend drives through,he starts screaming out,stop on the other side,dont leave me babe,shes done that before.Oh Really.He then needlessly abused several fisherman,when he stopped we carried on.We moored north of Burscough with the wind increasing in strength. 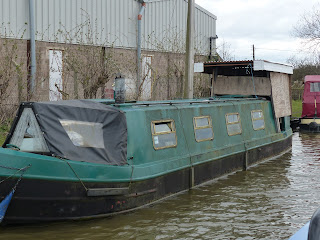 Very Stylee,     I said to Leonie,"we may have rushed some decisions".

Wednesday the wind was howling,we waited until midday for some respite then decided we had to push on.By the time we parked near Scarisbrick it was Howling,got our pins in,just then settled down.A wide beam came past to fast and blew our front pin out of the ground,re-pinned but increasing wind and the pins looking shakey forced a move about half a mile.There was bollards there but it was blowing that hard by the time Leonie jumped off and tried to wrap the rope the boat was in the middle of the canal and uncontrollable.Blown onto the "offside"we had no choice but to stay put.Leonie hadto walk to a road bridge to cross and come back through a paddock and blackberries.The wind increased strength to gale force in the night,it was like being in a plane with severe tubulance,all night.The gale had removed the top layer of a farmers cultivated paddock several miles away and it found its way inside the boat through the rear hatch and starboard hatch seals.Real fine like volcanic dust,everywhere,what a job cleaning up. 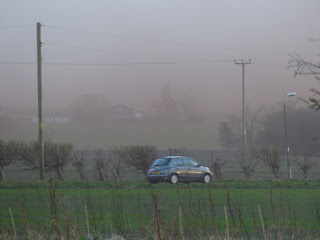 The dust is on its way. 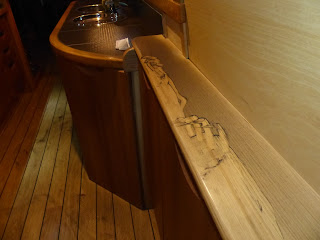 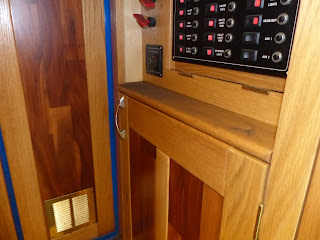 Set off today,wind gusting and some of the swing bridges in the exposed areas made boat handling a real handful.But we made bridge 9 and are looking forward to getting into the docks of Liverpool. 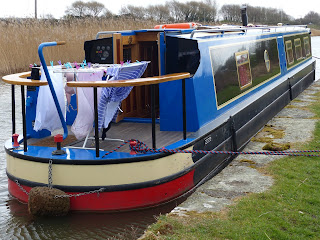 Something the winds handy for.. 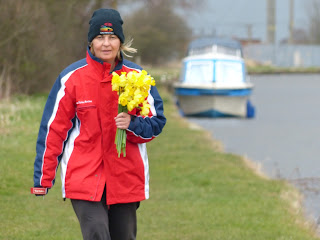 Yeah,Na of course I paid for them. 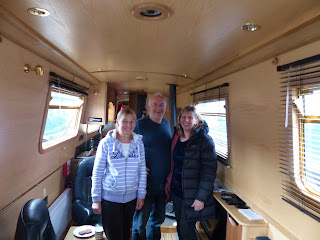 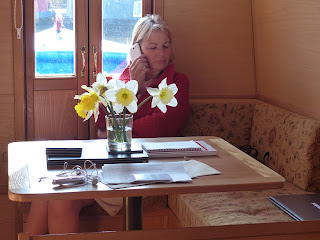 Having to wait around for some cards from the bank to arrive and getting struck down with Cabin Fever we decided to hire a car for a couple of days.Not our original intentions but things change,you know,go with the flow.Anyway Blackpool was chosen as a destination cause you cant get there by narrow boat anyway.The weather was okay when we arrived but soon turned to cold wind blown rain.We parked on a roof top car park and the first stand out was the BP tower. 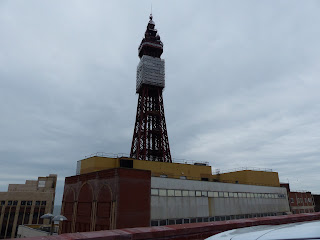 A touch ugly with scaffolding for maintanance

Every street leading to the Promenade was full both sides with hotels,B&Bs for accomodation,must be some price competition going on. 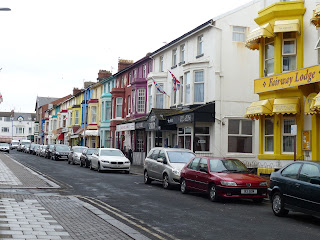 Every building accomodation both sides

Then it was down the beach for a look at the sea and sand. 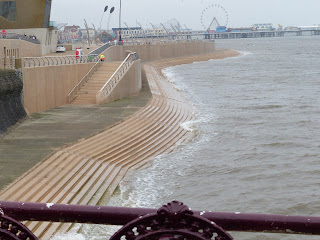 The concrete goes for miles 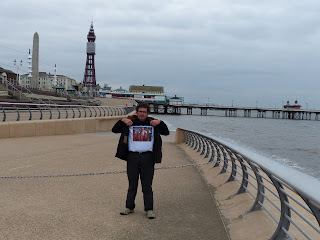 Was going to take the horses for a gallop Bruce,to cold, had to leave covers
on.

Had a look in the Winter Gardens Building,a nice old school job.Famous for me cause ive
seen the World Champ Darts televised from there. 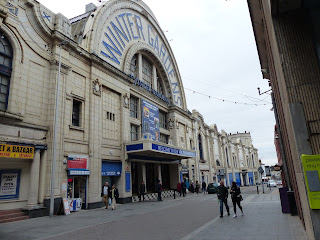 Covered in white tiles I reckon 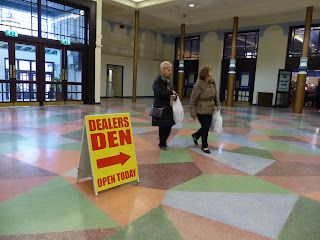 In entry foyer,your gotta be joking.Even at home in the
"NUI" they aint that blatant.NICE discuise guys but the
Deal bags are a giveaway.

Then walked out on the North Pier,thats when the rain started. 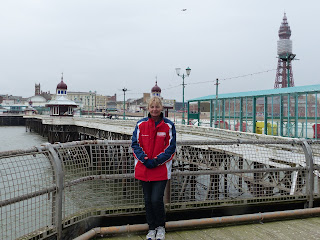 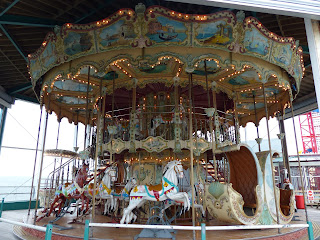 Back to the Promenade,this where the circus really starts,the length of the street,crap souvenir, gimmick shops,fortune tellers dens,bars with girlie shows all with the hustlers outside touting for business.It was wet and cold,people were wet and some of the girls outside the bars/clubs were only wearing cotton tee,s short shorts,the headlamps were on full and some looked like they were carrying  a python around the mid drift.Also ive never seen so many fish & chip shops in one area. 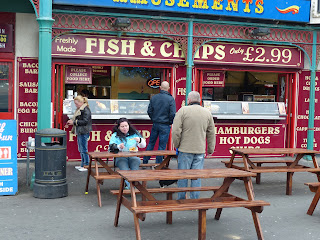 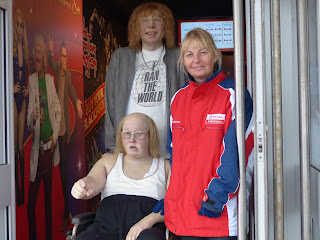 Not everyone was from a circus.

I reckon Blackpool was worth a trip but a day was plenty.

Looking at the weather forecast Thursday seemed like the best day for the driving lesson & locking demo,s,nice choice,intermittent rain with a freezing wind chill.After topping up the diesel tank & swapping a gas bottle from the fuel boat we set off.Passed Paul & Elaine at Crooke,im on the tiller making for our first lock.I found the boat more responsive than  I imagined so steering seemed to be going ok.Janet took Leonie to do the lock,i steered in and out.no sweat.The second lock was Appley deep lock,the fall to the exit water level is quite amazing,Hey,were new to this,ok.I think some people could get claustrophobic down there.Next was a pedestrian swing bridge,human power to move,then 2, stop the traffic, swing bridges,electric.Pulled over at Parbold, opposite the old windmill, had some lunch.NB The Manly Ferry passed with the rain falling and a bitter wind blowing.We carried on to the Rufford Branch junction,our u turning point were I gave the over bridge a bit of a nudge but completed a "5 point"turn.Leonie steered on the return and I did the swing bridges & locks.All in all a really enjoyable first days boating.Thanks Janet & Pete for passing on your valuable knowledge & braving the cold.